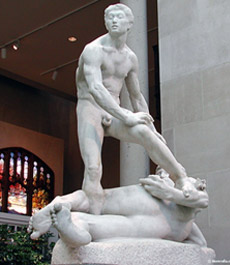 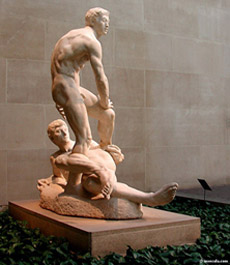 With Alfred Corning Clark financial support, Barnard was able to live and work in Paris, where, in 1888, he began Struggle of the Two Natures of Man, his best-known sculpture. The artist labored on the group for more than six years and carved most at the marble himself. He exhibited it in Paris in 1894 Expostion of the Société nationale des Beaux-Arts under the title “Je sens deux hommes en moi” I sense two men in myself) taken from a poem of Victor Hugo.