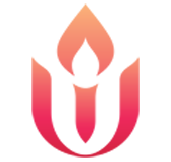 The flaming chalice has become a well-known symbol of our denomination. The chalice and the flame were brought together as a Unitarian symbol by an Austrian artist, Hans Deutsch, in 1941. Living in Paris during the 1930’s Deutsch drew critical cartoons of Adolf Hitler. When the Nazis invaded Paris in 1940, he abandoned all he had and fled to the South of France, then to Spain, and finally, with an altered passport, into Portugal.

There, he met the Reverend Charles Joy, executive director of the Unitarian Service Committee (USC). The Service Committee was new, founded in Boston to assist Eastern Europeans, among them Unitarians as well as Jews, who needed to escape Nazi persecution. From his Lisbon headquarters, Joy oversaw a secret network of couriers and agents. Charles Joy felt that this new, unknown organisation needed some visual image to represent Unitarianism to the world, especially when dealing with government agencies abroad. Deutsch was most impressed and soon was working for the USC. He later wrote to Joy:

“There is something that urges me to tell you… how much I admire your utter self denial [and] readiness to serve, to sacrifice all, your time, your health, your well being, to help, help, help.

“I am not what you may actually call a believer. But if your kind of life is the profession of your faith—as it is, I feel sure—then religion, ceasing to be magic and mysticism, becomes confession to practical philosophy and—what is more- –to active, really useful social work. And this religion— with or without a heading—is one to which even a `godless’ fellow like myself can say wholeheartedly, Yes!”

The USC was an unknown organization in 1941. This was a special handicap in the cloak-and-dagger world, where establishing trust quickly across barriers of language, nationality, and faith could mean life instead of death. Disguises, signs and countersigns, and midnight runs across guarded borders were the means of freedom in those days. Joy asked Deutsch to create a symbol for their papers “to make them look official, to give dignity and importance to them, and at the same time to symbolize the spirit of our work…. When a document may keep a man out of jail, give him standing with governments and police, it is important that it look important.”

Thus, Hans Deutsch made his lasting contribution to the USC and, as it turned out, to Unitarian Universalism. With pencil and ink he drew a chalice with a flame. It was, Joy wrote his board in Boston, “a chalice with a flame, the kind of chalice which the Greeks and Romans put on their altars. The holy oil burning in it is a symbol of helpfulness and sacrifice…. This was in the mind of the artist. The fact, however, that it remotely suggests a cross was not in his mind, but to me this also has its merit. We do not limit our work to Christians. Indeed, at the present moment, our work is nine-tenths for the Jews, yet we do stem from the Christian tradition, and the cross does symbolize Christianity and its central theme of sacrificial love.”

The flaming chalice design was made into a seal for papers and a badge for agents moving refugees to freedom. In time it became a symbol of Unitarian Universalism all around the world.

The story of Hans Deutsch reminds us that the symbol of a flaming chalice stood in the beginning for a life of service. When Deutsch designed the flaming chalice, he had never seen a Unitarian or Universalist church or heard a sermon. What he had seen was faith in action—people who were willing to risk all for others in a time of urgent need.

Today, the flaming chalice is the official symbol of the Unitarian Universalist Service Committee and the Unitarian Universalist Association. Officially or unofficially, it functions as a logo for hundreds of congregations. A version of the symbol was adopted by the General Assembly of Unitarian and Free Christian Churches in Britain. It has since been used by Unitarian churches in other parts of the world. Perhaps most importantly, it has become a focal point for worship. No one meaning or interpretation is official. The flaming chalice, like our faith, stands open to receive new truths that pass the tests of reason, justice, and compassion.