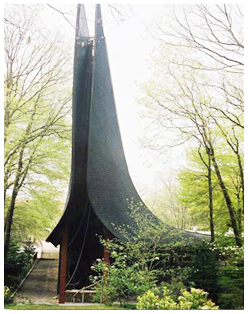 In February of 1949 a group of 12 liberal thinkers and seekers met in Sarah Taylor’s living room in Bridgeport and voted to establish “The First Unitarian Fellowship of Fairfield County.” Soon the group became too large for meeting in members’ homes. The Westport Woman’s Club was rented in January 1950 for weekly services. In the summer of 1952 the Fellowship hired a minister. Dr. Karl Moses Christian Chworowsky was persuaded to come out of retirement to serve the Fellowship. “Dr. Karl” preached his first service in November of 1952. There were, by this time, 80 members with an annual budget of $2,400.

Five years later the Church had 260 members and had moved weekly services to the Saugatuck School. Although the Saugatuck School was physically adequate, the growing energetic membership felt “homeless” in Westport. With $3,000 raised by the Women’s Alliance, a down payment was made on 9 acres of land along Lyons Plains Road.

Dr. Karl persuaded the Board that it was time for him to retire (again) and in 1958 a new minister was called. Arnold Farrow Westwood beame the second minister of the church, and if any one person can be named, it was he who “got this building up.”

In January of 1959 New York architect Victor Lundy’s design for the church was accepted. All who enter the sanctuary of the Unitarian Church in Westport for the first time are struck by the image of its soaring roofline — described by some as a bird in flight, protective wings or hands, or even a ship taking sail. The roofline of the church hovers, made from hundreds of two-by-fours laid endwise and sweeping upward. Architect Lundy, commenting on his design noted that “Dialog — the question, the open end, the unresolved — this is all a part of Unitarian-Universalism. This is carried out in the roof — in two parts — never quite coming together, and a skylight allowing light to come in.” Designed in 1959, construction of the building was completed in 1965. It won the Progressive Architecture Award in 1960. The pulpit, also designed by Lundy, was a gift to the church from Norman Cousins dedicated to Dr. Albert Schweitzer. 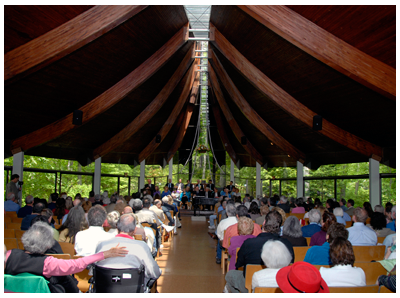 Theater, music, poetry and art have played an important part in church life through the years. The works of such well-known authors as Shaw, MacLeish, Chayevsky, Edna St. Vincent Millay, Tennessee Williams, Emerson, Cummings and Whitman have provided material for worship services in dramatic form. Our Sunday services are as challenging as they are creative and diverse.

Equally important in the history of this congregation is its strong record as a place of social activism and anti-oppression work, There are countless opportunities for members and friends to become involved in our many social concerns programs ranging from school mentoring programs to outreach to gay, lesbian, and bi-sexual people. Our members’ collective efforts provide food for the hungry, and toys for the children of prisoners, woman and man hours helping to build homes for Habitat for Humanity. Our social justice work derives from the first of the Principles & Purposes of the Unitarian Universalist Association: We affirm and promote the inherent worth and dignity of every person.