Many thanks to the TUCWomen’s Black Lives Matter education group and the TUCW Beardsley Committee. Together they created an online Career Day for Beardsley, an elementary school in Bridgeport. On March 26th, a firefighter, a nurse, a small business owner, and a wardrobe supervisor for the Showtime series Billions spoke to third through sixth graders via an online platform called Microsoft TEAMS. 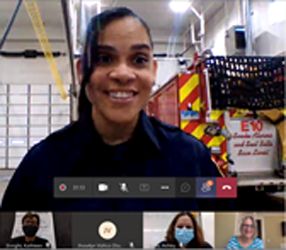 PE Sheila Santiago, a dynamic speaker, thoroughly engaged with the third graders. She’s the first female to become a pumper engineer for the Bridgeport fire department. A pumper engineer drives the truck, sets up the hose, and monitors the panel that controls the water pressure. PE Santiago first gave the students some fire safety tips, then told them that ever since she was a young girl watching the firemen put out fires in East Bridgeport, she wanted to be a fire fighter. She wondered why there weren’t any firewomen. The students asked interesting questions, along with some fun ones like, “Do you own a Dalmatian?” and “Do you slide down the pole?” 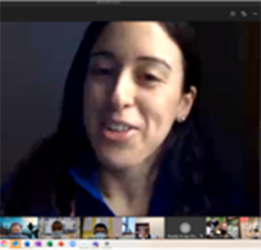 Lizete dos Santos, RN, connected really well with the fifth graders, because that is the same age when she decided to become a nurse herself. She is also from Bridgeport and grew up in Bridgeport. The students wanted to know what was the grossest thing she has ever seen, how many people she has healed, if she ever saw a gunshot wound or a car accident victim, if she has ever treated a prisoner, and how many years it takes to become a nurse and a doctor. 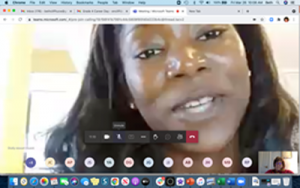 Shelly Stewart shared with fourth graders what it is like to start up and run a small business and make a personal dream come true. An accounting major from Sacred Heart, Shelly started her own daycare business several years ago in Easton. She works with state and local government, parents, leaseholders and employees to have up to 18 children a year be under her charge: from 6 weeks to 5 years! She loves working with these little beings as they grow up! Shelly was able to share with the Beardsley 4th graders the responsibilities, the ups, the downs, and the ongoing pleasure of this work. “It takes determination but it’s absolutely worth it,” she concluded. 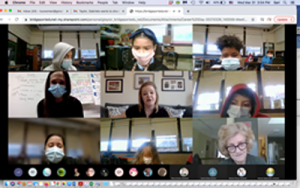 The Beardsley 6th graders questioned Lauren Pivirotto, Principal Pivirotto’s daughter, about her job as the costume supervisor for the Showtime TV series ‘Billions’. In addition to sharing some tools of her trade like two-sided tape to smooth out button-down shirts and leather punchers to adjust the fit of a belt, Lauren told them what led her to this career and what she was interested in as a 6th grader through high school (theatre!). Although she is a supervisor now, Lauren worked her way up by learning to sew and becoming a stitcher under the direction of a costume designer. She told the students that mentors helped her along the way and that she loves her career!