WINDSOR, Mass.- The Rev. Arnold Farrow Westwood, of 104 Windsor Bush Road, died Sunday, August 16, at age 88 at Baystate Medical Center in Springfield as a result of injuries sustained in a fall the previous day. Beloved by family and friends, he lived life with zest and enthusiasm and embraced death without fear or regrets. 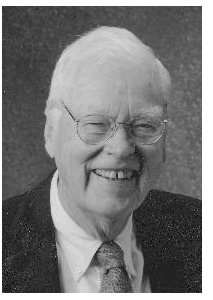 Born in Toledo, Ohio, on May 19, 1921, he was the son of the Rev. Horace Westwood and Elizabeth Farrow Westwood, both of whom were English immigrants. He spent his early years in Berkley, Calif ., and Warner, N.H. He was educated at University of California Berkley and Tufts University, where he received his Master of Sacred Theology in 1948.

While serving as a student minister under the Rev. Harold G. Arnold at the Theodore Parker Unitarian Church in West Roxbury, Mass., he fell in love with the minister’s daughter, Carolyn Freeman Arnold, and married her in 1945.

Mr. Westwood spent 40 years in the Unitarian Universalist ministry, starting as a student minister with congregations in Yarmouthport and Brewster on Cape Cod. This was followed by pastorates at Urbana, Ill.; Westport, Conn.; and Cleveland, Ohio. He returned to New England in the early 1970s, culminating his career by concurrently serving congregations in Manchester, Conn., and Amherst, Mass. Each named him Minister Emeritus. His ministry was hallmarked by the organizational development and membership growth of the congregations he served. Under his leadership, two of them — Manchester and Westport — built their first-ever buildings, the latter by the noted architect Victor Lundy.

In 1961, the Westwoods purchased a ramshackle 1854 farmhouse in Windsor to use as a summer home. With the help of their children and “adopted” children, Arnold and Carolyn spent the next 20 summers renovating the house, putting in a pond, building a barn and a sugar house, and ultimately tearing down the original el and building a modern solar-heated addition in its place. He and Carolyn became year-round residents in 1973.

Shortly before his retirement from the ministry in 1984, the couple started developing their home into Windfields Farm Bed & Breakfast. In addition to hosting hundreds of guests from all over the world, they also produced maple syrup which won four blue ribbons at the Cummington Fair. Also upon retirement, Mr. Westwood organized The Friends of Windsor, Inc., to publish the town’s community newsletter, “Windsor Now & Then,” as well as the town’s free annual community telephone directory. H e served as editor and publisher until 2002.

After Carolyn died in 2001, Arnold found comfort, support and a new outlet for his talents in the West Cummington Congregational Church. He instituted the church’s newsletter and annual directory; organized and ran the annual goods and services auction; and worked enthusiastically on the conversion of the parish house into a heated, year-round. handicapped-accessible center for church functions and other community events. In all these endeavors, he gathered and groomed others to take over after him. He made many beloved friends through his experience in the church, including the second love of his life, Mary Hale, with whom he loved talking, reading, traveling and just being together.

Arnold was a devoted supporter of Rowe Camp and Conference Center in Rowe, Mass., where he served eight years on board of directors, four of them as chair. He was an enthusiastic early supporter of Shakespeare & Company and of VIA Dance Collaborative, a New York based company founded in 2001 by his granddaughter, Adrienne Westwood. He was thrilled to witness the company’s performance at Jacob’s Pillow the night before he fell.